Chapter one of College Algebra: we are learning about square roots. After you square something, you can use a square root to undo the square.  They provide reversibility.  The number under the root-sign-thingy is the radicand, and the number on the outside is the index. The entire square root expression is called a radical. 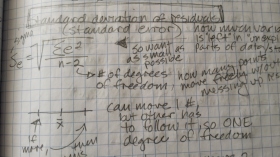 Radicals seem to be mostly used for party tricks with negative numbers. “Hey, Pythagoras, watch me square this negative number. POOF. I have a positive number. Where did the negatives go??” Without the negative, you can do practical things like calculate a standard deviation and play with “degrees of freedom.” As long as the squared numbers remain under the safe cover of the radical, they are in a (heterotopic) space where you can add, divide, apply, and make meaning.  And the really wondrous part? Not only can you square away negative signs when you don’t want them, and not only can you later conjure them back with your radical-at-the-ready, but you can ALSO bring them back with the new meanings still attached.

A radical in math is related etymologically to a radical in politics. The word means “from the roots, fundamental,” and—most surprising to me—”vital,” as in: “the humour or moisture once thought to be present in all living organisms as a necessary condition of their vitality.”  Thus a radical math expression and radical politics both desire to get at the root of a thing, to dig down to the fundamental part that cannot be broken down into anything smaller, to understand the vitality permeating the matter.  Imagining radical activists (think Arab Spring or Occupy) camping under the umbrella of the radical sign, it’s only a small step then to disappearing the negatives, functioning from a place of absolute value, and harnessing the inherent vitality of their expression. The power of this expression comes from the quantity of the root, which increases exponentially.

I’m not sure of the value in this comparison, other than to say there it is.  In my studies of radical politics, I plan to think more about the disappearing negatives, degrees of freedom, and how meaning is carried back across the threshold of the radical.